With less than 45 days to go until its theatrical  release, the Star Wars: The Force Awakens promotional campaign has kicked into high gear. Duracell is the first to release a commercial advertising both their batteries and the movie itself. To anyone unintentionally watching it on TV, it's a cute little clip about the wild imaginations of little children. But Star Wars fans quickly spotted some potentially major spoilers -- and they're not happy about it.

"Battle for Christmas Morning" opens on a young boy in a bedroom featuring skateboards, race cars, baseball bats, and everything else that a generic pre-teen likes (including several other Star Wars toys). He puts Duracell batteries in his blue lightsaber, and suddenly, there's laser fire in the hallway!

C-3PO (voiced by Anthony Daniels, as usual) and R2-D2 appear, with the former sporting a mysterious red arm glimpsed in behind-the-scenes photos from The Force Awakens. The boy jumps out of his room and battles stormtroopers clearly sporting the armor and blasters of the villainous First Order.

He runs outside to find his younger sister being marched by stormtroopers to Kylo Ren's black command shuttle. He throws her a green lightsaber, and soon they're in battling an army of stormtroopers and snowtroopers, with AT-ATs and TIE fighters shooting at them, and a fleet of Star Destroyers visible in the sky.

The presence of the AT-ATs could be interpreted as spoiling the appearance of the towering tanks in the movie. But if you look at them closely, they really look no different from their first appearance in The Empire Strikes Back, unlike the storm/snowtroopers and TIEs and Star Destroyers, which have clearly been redesigned for The Force Awakens.

No, the real spoilers lie in the clothing. The boy wears a costume identical to Ben Kenobi's in A New Hope, while the girl, "Lisa", wears a loose, tan cloak very reminiscent of a certain desert dweller who we have yet to see on the big screen: Rey. And when I say "very reminiscent", I mean that Lisa and Rey must have gone to the exact same Jakku shopping mall and bought the exact same clothes in different sizes. 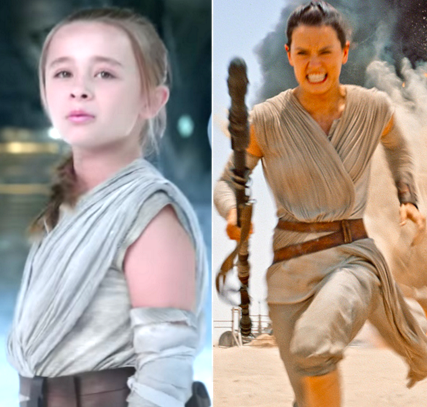 So when you see this Rey impersonator giving Force pushes and wielding a lightsaber, you can't blame fans for putting two and two together and interpreting this as confirmation of Rey's Force sensitivity in the movie, and possibly even her Skywalker parentage.

On the other hand, Disney/Lucasfilm has been very active about keeping the movie's secrets hidden, and they were clearly highly involved in the production of this commercial, so why would they let this potential spoiler be implied by Lisa's costume? Either they simply didn't notice anything spoiler-y, or they did notice but the implied spoiler is false, or they noticed and the implied spoiler is true but they still let it go through just to mess with all the fans.

What did you think of the commercial? Tell me in the comments, and may the Force be with you all.
at 5:30 PM