All the Possible 'Rogue One' Cameos

Rogue One's marketing campaign has made it clear that, while the film will center on mostly new characters, there'll still be some familiar faces in the background. Besides Mon Mothma and Darth Vader (who have both been explicitly featured in the trailers), what other cameos from old Star Wars characters can we expect, and which cameos are less likely? 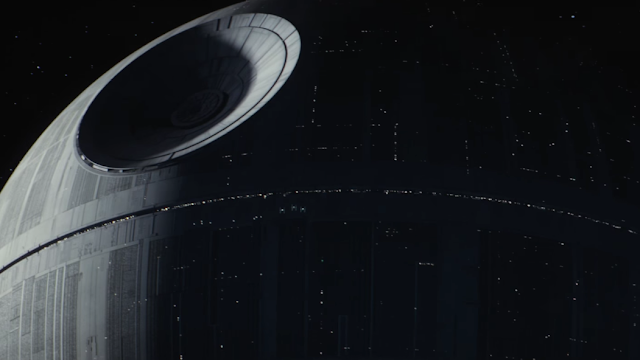 Let's start with one that's already been more-or-less confirmed; back in August, Jimmy Smits revealed that he'll be reprising his role as the Senator and adoptive father of Princess Leia. As a key leader of the Rebellion and a close friend of Mothma's, it's not hard to imagine how Organa would fit into the plot of Rogue One.

If you need any more evidence, consider this shot from July's Celebration Reel, which appears to show Organa at a Rebel conference with Mon Mothma: 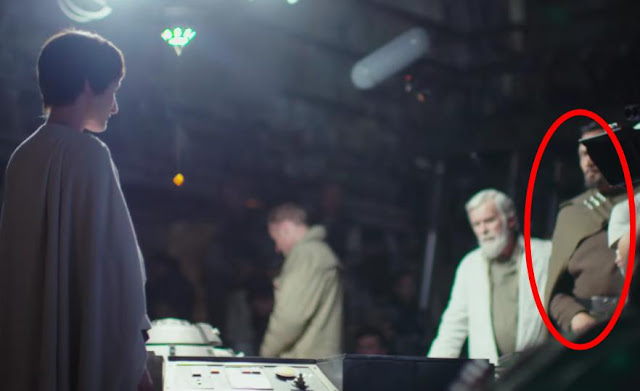 Probability: Certain, unless (for whatever reason) Organa's scene ends up cut as a result of the behind-the-scenes shakeups.

As significant as Bail is, he hardly compares to his strong-willed daughter. After all, she's the one who ends up with the Death Star plans in the opening scenes of A New Hope. And there were even rumors that Rogue One ends mere moments before the beginning of the original Star Wars, in which the Tantive IV (with Leia onboard) is chased by a Star Destroyer.

However, don't expect to actually see Leia's face in the film; you wouldn't go to the trouble of recasting a character as famous as Princess Leia for only a single scene, especially if it were the last one. The shock of – without warning – seeing someone other than Carrie Fisher in the role would completely distract the audience from the dramatic weight of the movie's ending.

Instead, the final shot of the film could be Leia looking out the bridge of the Tantive IV with her back faced to the audience and her white gown and iconic hair in full view, leaving no doubt as to the identity of this character. The ship's jump to hyperspace would mark the transition to Rogue One's end credits. 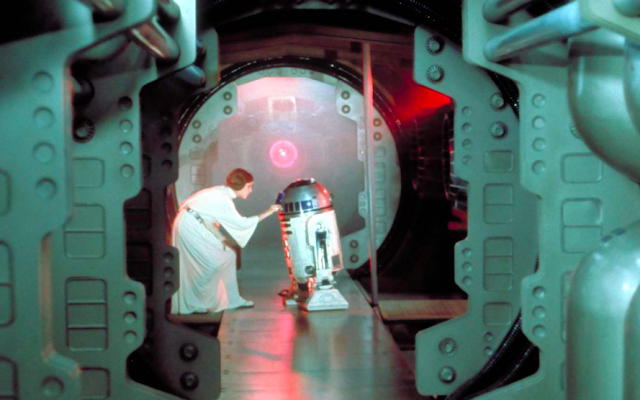 No, that specific prediction is probably too good to be true. But if the filmmakers want to bring back a truly classic Star Wars character to emphasize the magnitude of the theft of the Death Star plans, Leia would be the obvious choice.

If Leia's going to appear, then what about two other famous Tantive IV passengers? These droids have been in service of the Organa family for almost 20 years, and they play a key role in bringing the Death Star plans to the Rebel base on Yavin 4. So far, Anthony Daniels has made no indication that he'll be returning to voice/play Threepio in Rogue One. But, like with Leia, a silent cameo could be just as powerful. If the last scene of the film is indeed the Tantive IV's departure, we could see Threepio and Artoo standing right beside the Princess.

The only downside of this cameo would be for Duracell. The battery company (accidentally?) hinted at Rey's Force sensitivity in a commercial last year, and fans are already wary of their newest ad, fearing that it's spoiling Artoo's appearance in Rogue One. If it turns out that Duracell actually was prematurely revealing a major Star Wars plot point for the second year in a row, they might have to deal with a mob of angry fans.

When we first heard about the basic premise of Rogue One, it was pretty much guaranteed that Wilhuff Tarkin, who commands the Death Star in A New Hope, would have a role in the film. Instead, Orson Krennic is the main villain and the man in charge of the battle station's construction. 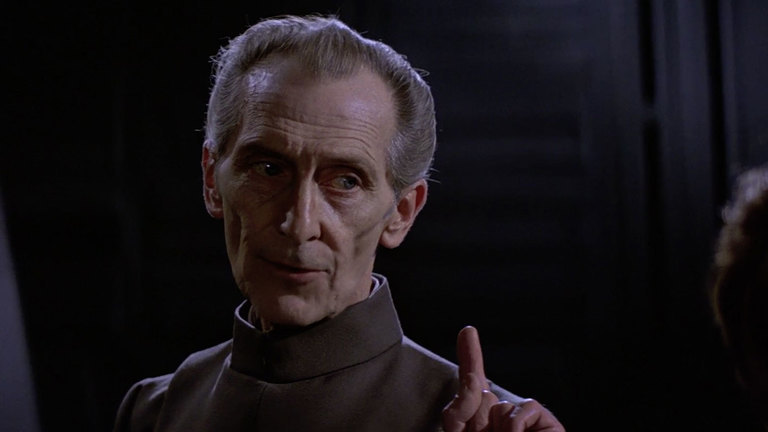 The relationship between Krennic and Tarkin was clarified by USA Today this week; the two officers are competing for a spot in the Empire's elite top circle. The Death Star must be the key to getting into that club, so if Krennic dies (which is pretty darn likely), Tarkin would take his place.

As if that weren't enough evidence, the final trailer had a shot that focused on a single Imperial approaching Krennic on the bridge of the Death Star (seen below). Many fans speculated that this was Tarkin, and since this scene appears to be a congregation of Imperial officers, it would make total sense if the Grand Moff showed up here to have a few words with Krennic. 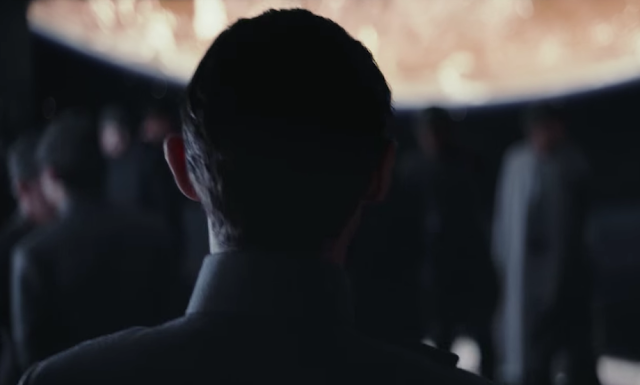 The villains of Rogue One – Krennic, Vader, and (probably) Tarkin – aren't exactly pals, but they all have one thing in common: they answer to Palpatine, the ultimate leader of the Empire. The Death Star is supposed to snuff out any threat of rebellion and secure the Empire's control over the galaxy, so wouldn't Palpatine want to check in on the project? 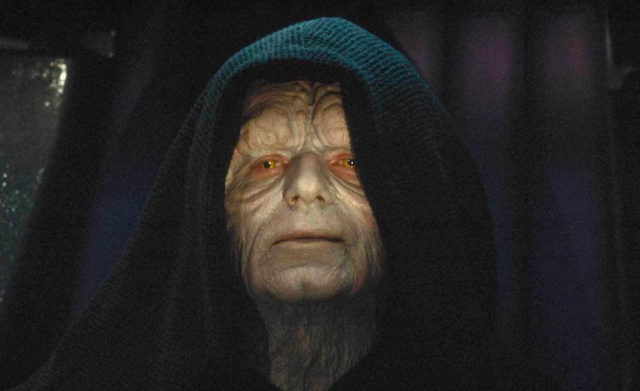 Unfortunately, Ian McDiarmid – who played Palpatine in both Star Wars trilogies – has said that he won't be returning. He could be lying (obviously), but unlike Vader and Tarkin, it would be perfectly reasonable if the Emperor's presence in the film was limited to a few name-drops. He's got a whole galaxy to oppress, for crying out loud.

The only solid evidence of Palpatine's appearance is a shot (below) from the film's first trailer showing us a hooded figure kneeling next to the Emperor's Royal Guards. Although the red-robed warriors are never more than a few paces away from Palpatine, we've still not received any explanation for this intriguing visual. It's possible that this scene has been cut from the film since then, and it'll end up infamous as Rogue One's biggest mystery. 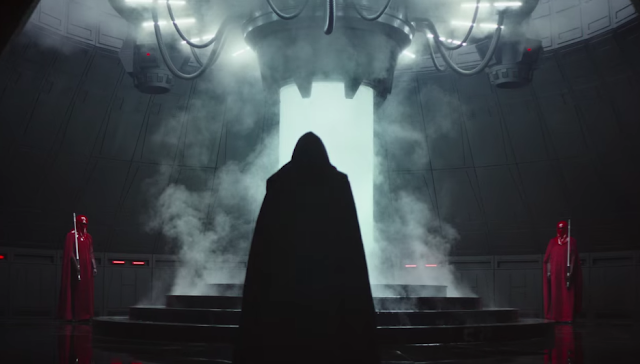 This animated series already takes place in the same time period as Rogue One and stars a team of misfits (including two Jedi) who regularly embark on daring missions against the Empire. Sounds like there's a lot of opportunity for overlap, right? Well, not necessarily. The newest episodes of Rebels are still at least three years before the events of Rogue One, so any kind of cameo or reference would come dangerously close to spoiling the fates of these characters. And they probably wouldn't go to the trouble of bringing an animated character to life (which must be a pretty hard task) for a very brief appearance that only a small fraction of the audience would recognize.  At the very most, Rogue One will have some throwaway reference to Captain Syndulla and the secret Rebel base on Atollon. That would be perfectly reasonable considering all that the Rebels crew has done for the Rebellion, and it would satisfy the fans who want some recognition for the series.

This rumor was bound to happen. On the surface, Han Solo should have no reason to appear in Rogue One; he wasn't affiliated with the Rebellion whatsoever prior to A New Hope. But Alden Ehrenreich's recent casting as Solo in the character's 2018 spinoff film has led many to speculate that he could first appear in Rogue One.

No, it wouldn't be absurd to have Solo pop in for a moment as a friend of a fellow outlaw like Jyn or Baze. But in this case, they would mostly just include the cameo in order to promote the Han Solo movie...which wouldn't make a ton of sense, since it takes place about 10 years before Rogue One.

When asked about Solo's presence in the film, director Gareth Edwards said, "I’m not sure if I’m allowed to do this, but I think I should... Han Solo’s not in the movie.” That's not the tone of someone carefully lying to avoid spoiling his own movie. That's the tone of someone who's annoyed about the (false) rumors and wants to definitively shut them down, without the permission or guidance of any of the Lucasfilm executives.

The rest of the cameos mentioned in this post are familiar characters who are clearly relevant to the plot of the film. A Han Solo cameo would feel like Lucasfilm telling us, "Hey look, here's your first look at the new version of this iconic character! In two years you'll be able to see a younger version of him in a completely unrelated movie!" Pretty lame.

Which of these cameos are you hoping for? Who else do you think could appear in Rogue One? Tell me in the comments or tweet to @SithObserver, and may the Force be with you all.
at 8:25 PM No comments:

Eight character posters for Rogue One were revealed by the official Star Wars Twitter account this afternoon. Taking a cue from the right part of Jyn's body in last week's theatrical poster, each of these posters has a character's face with the blue diagrams of the Death Star plans spread across them. 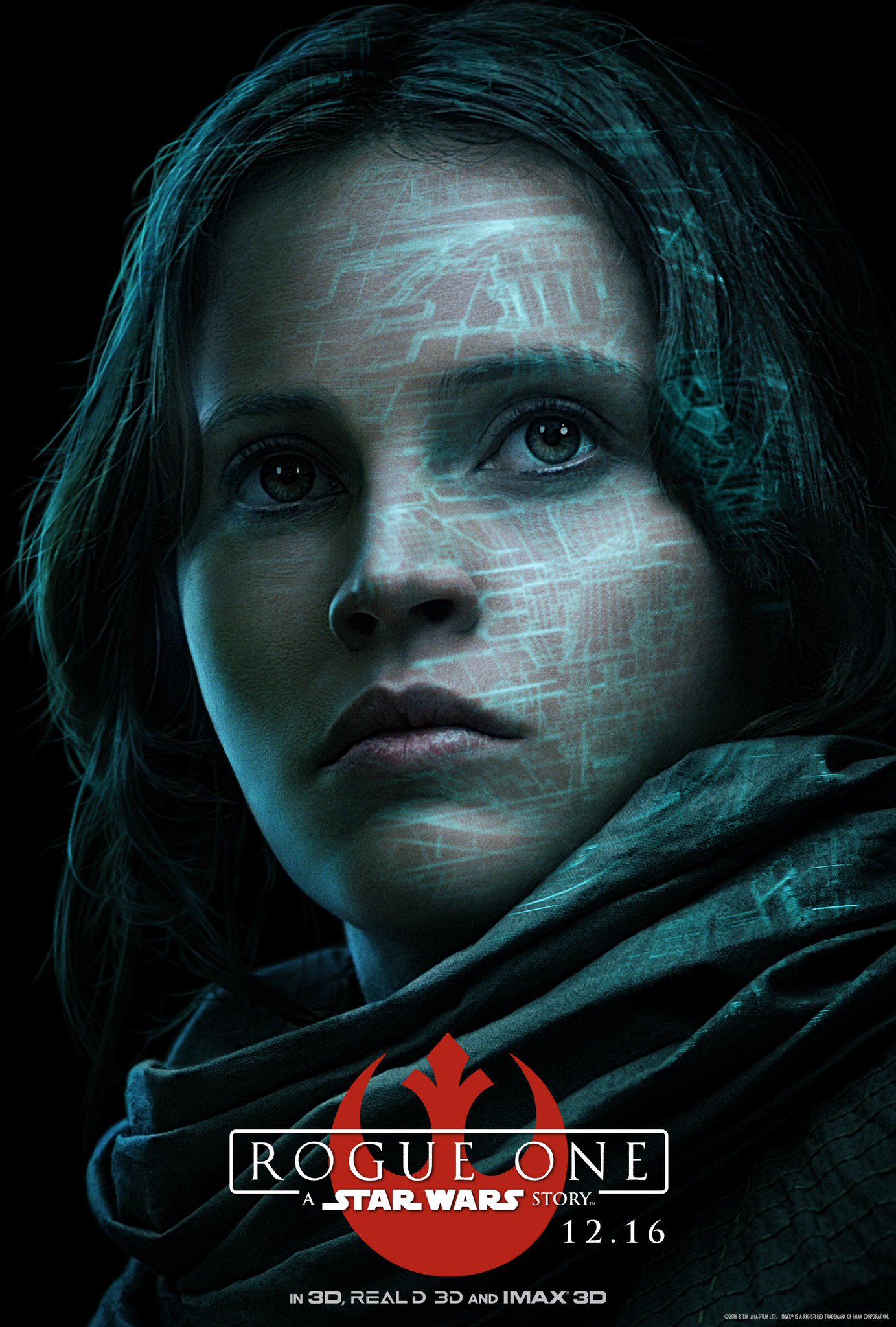 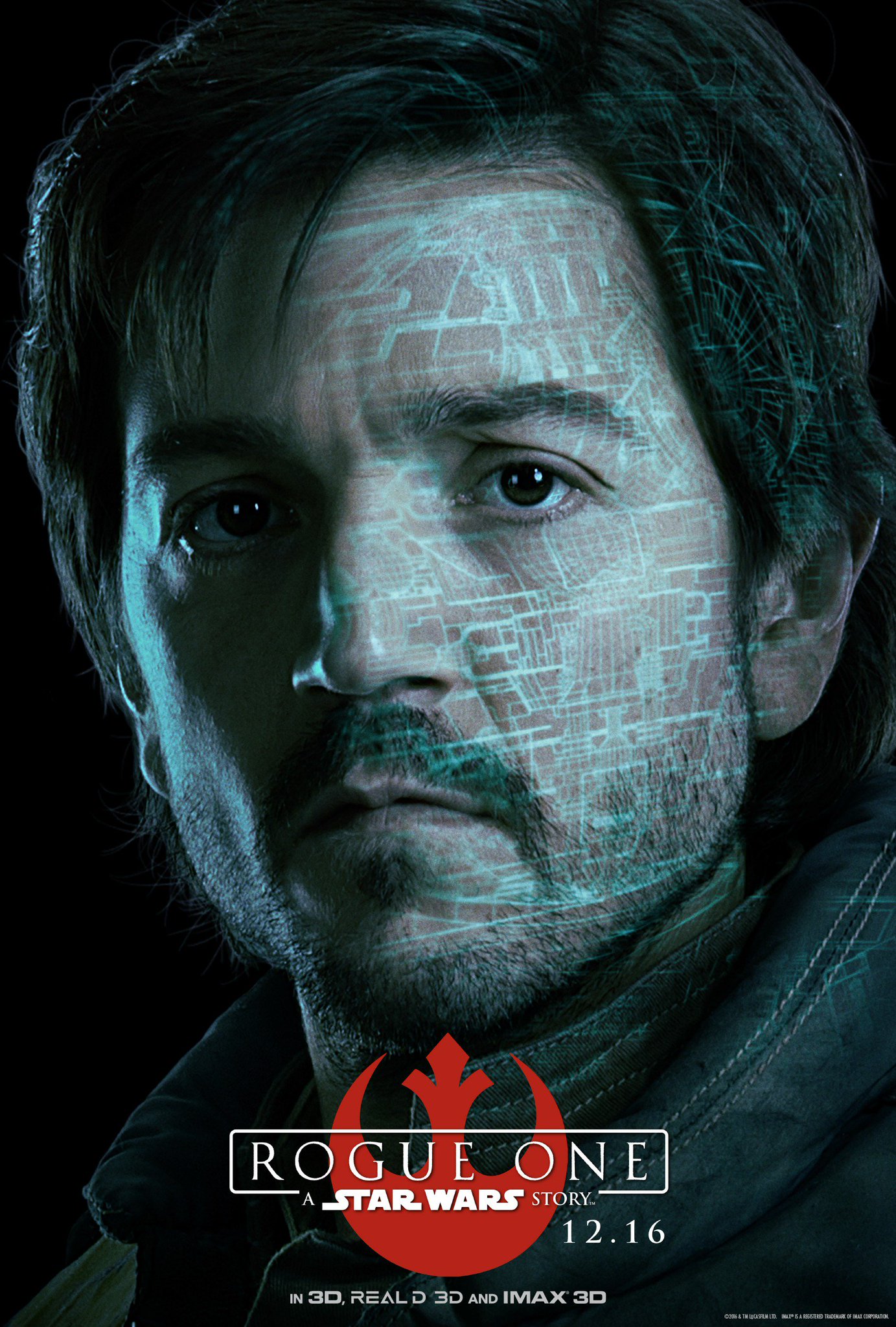 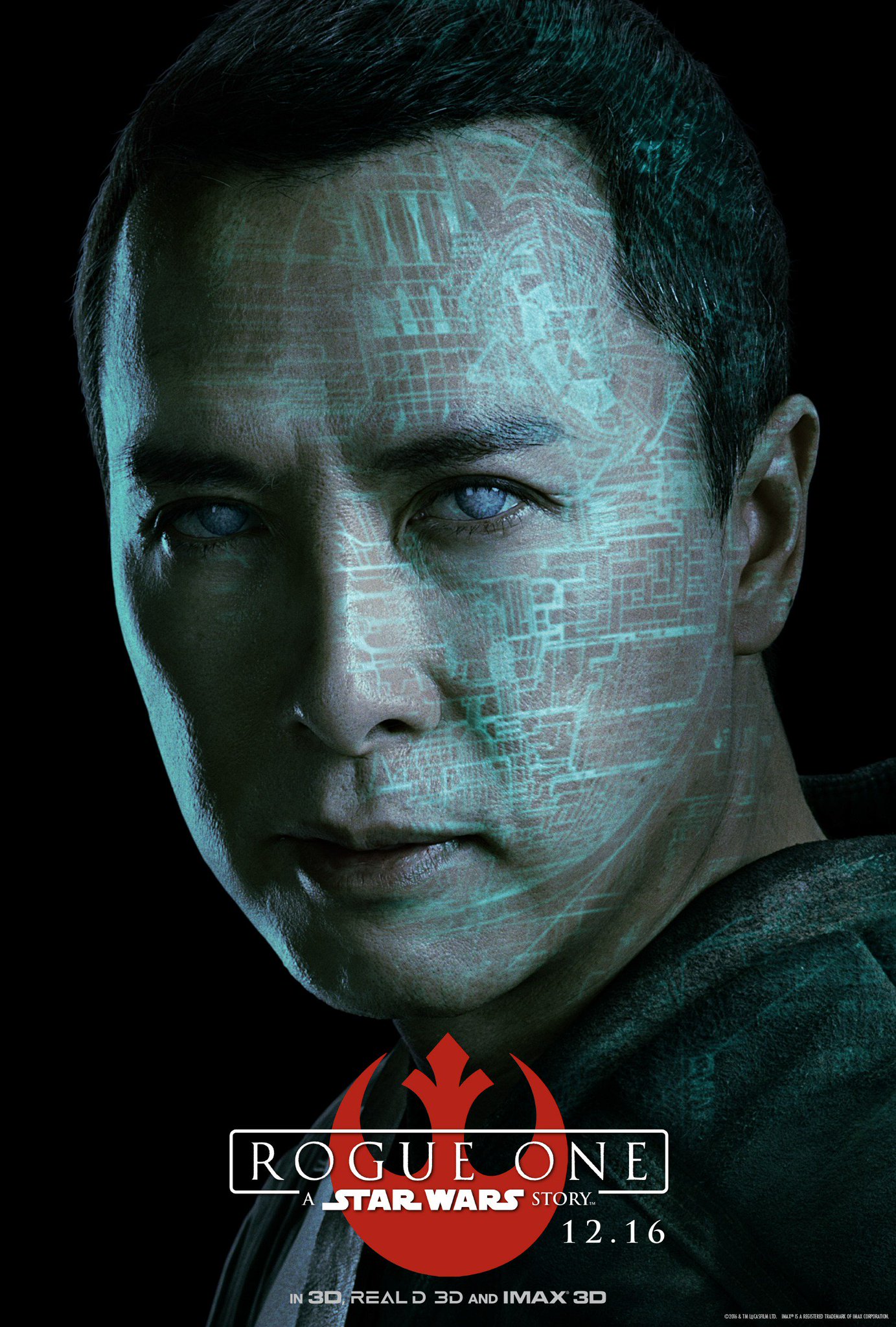 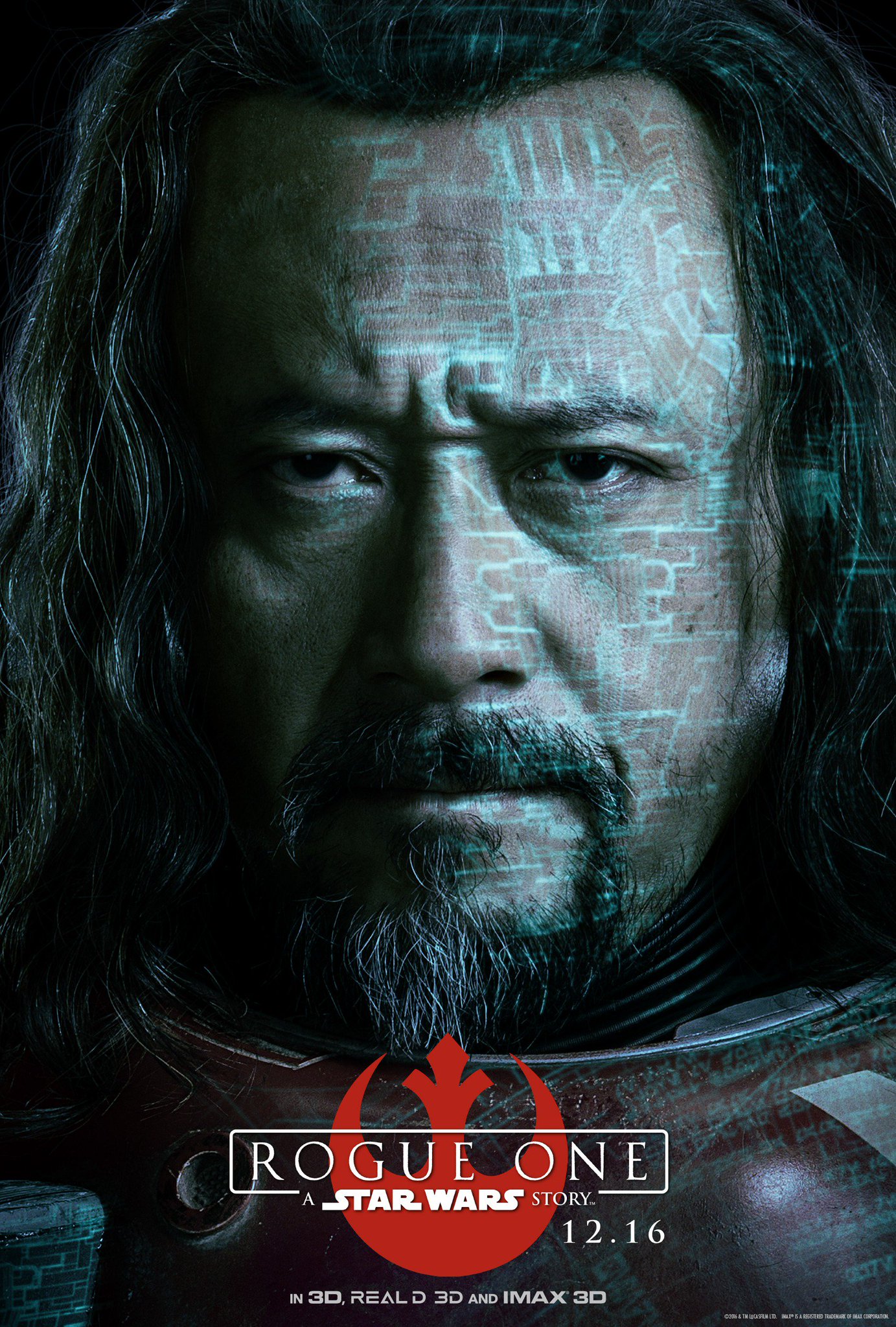 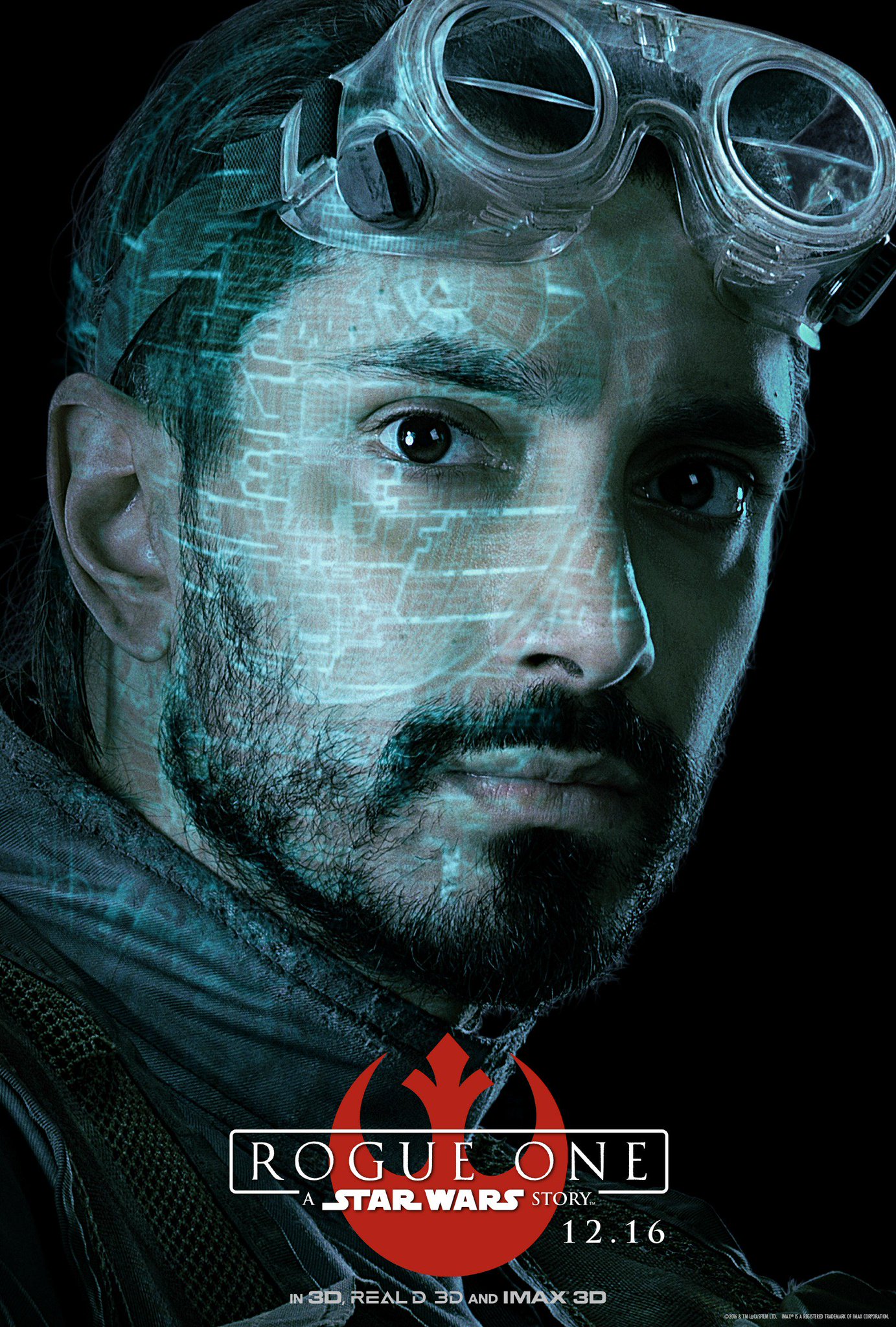 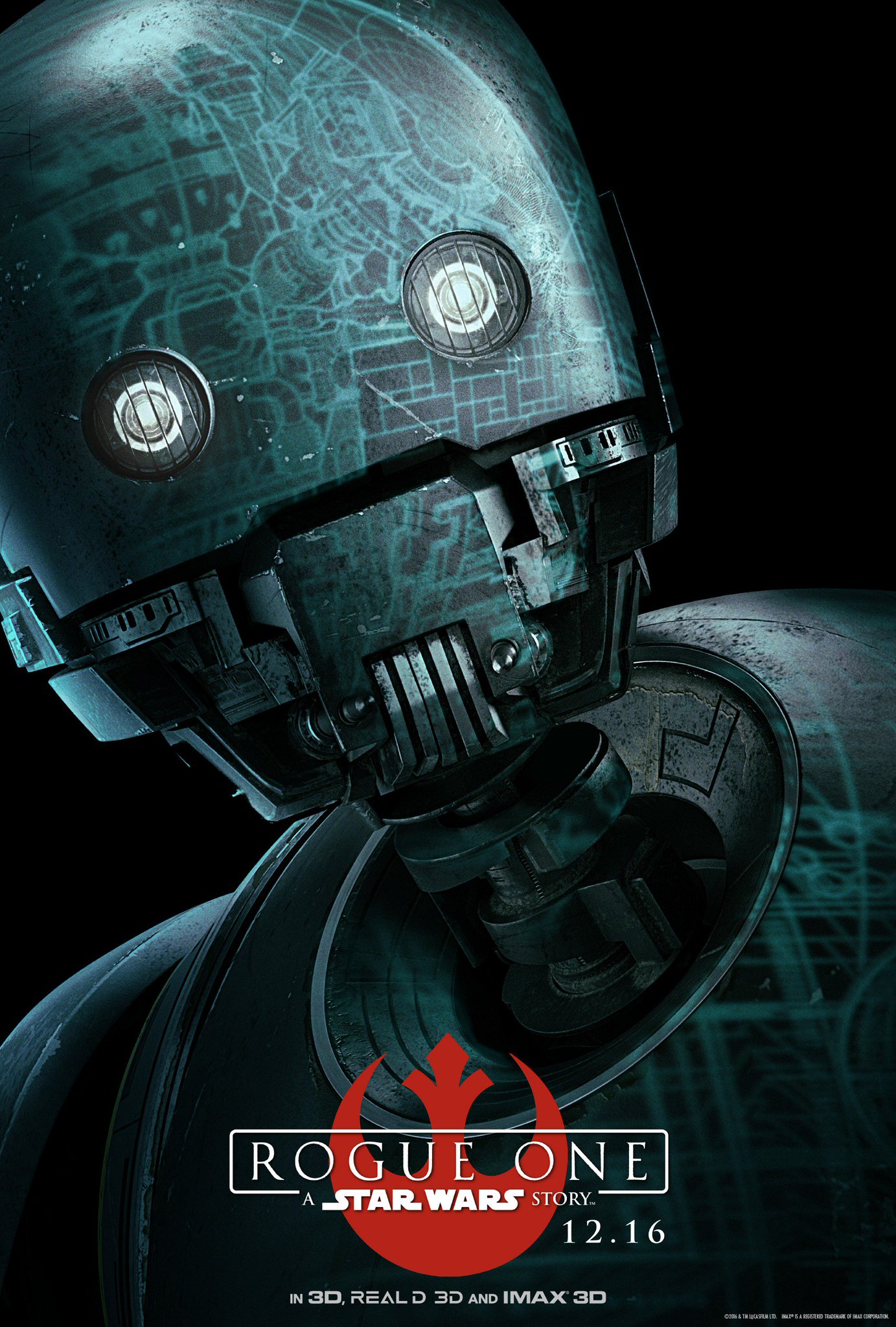 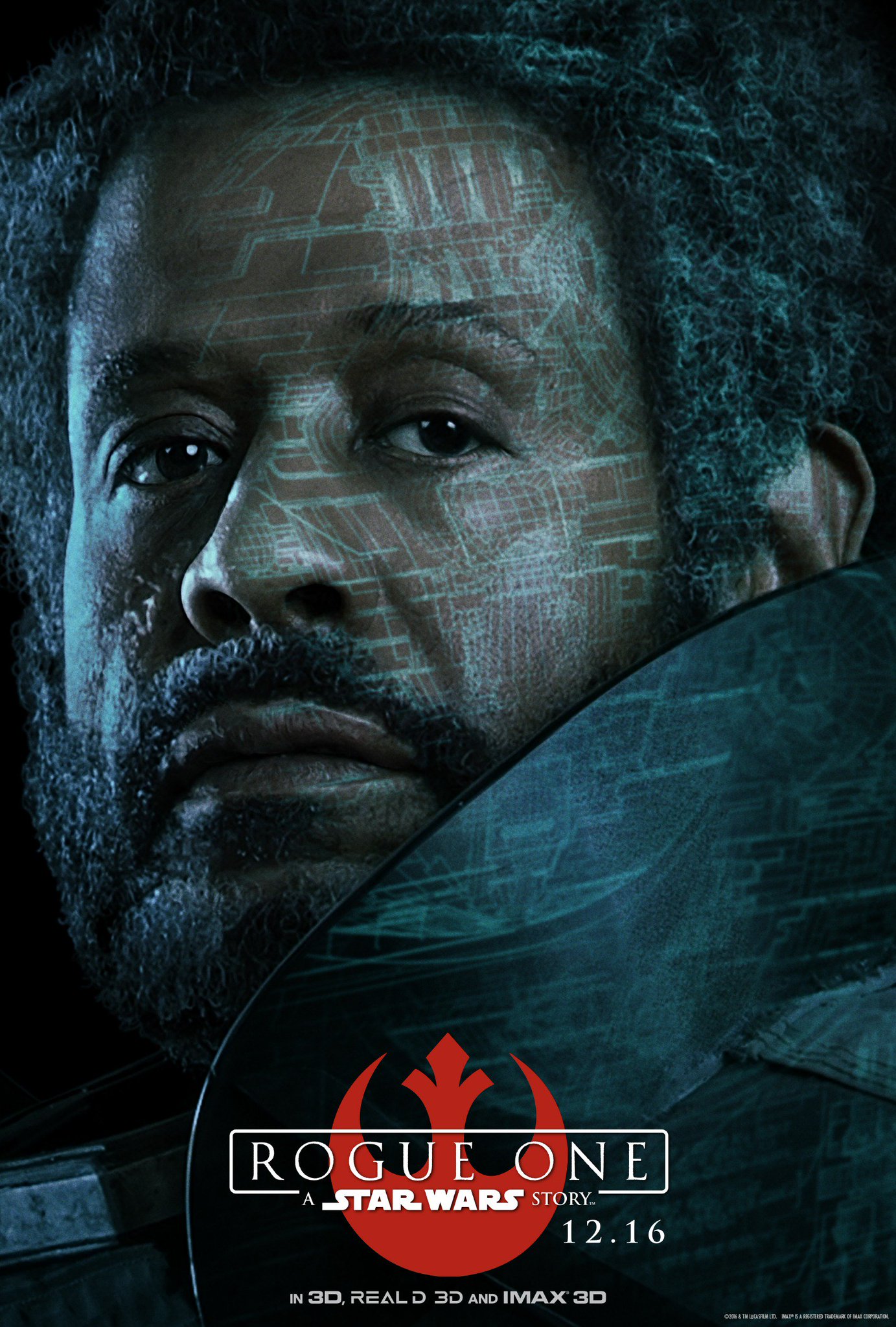 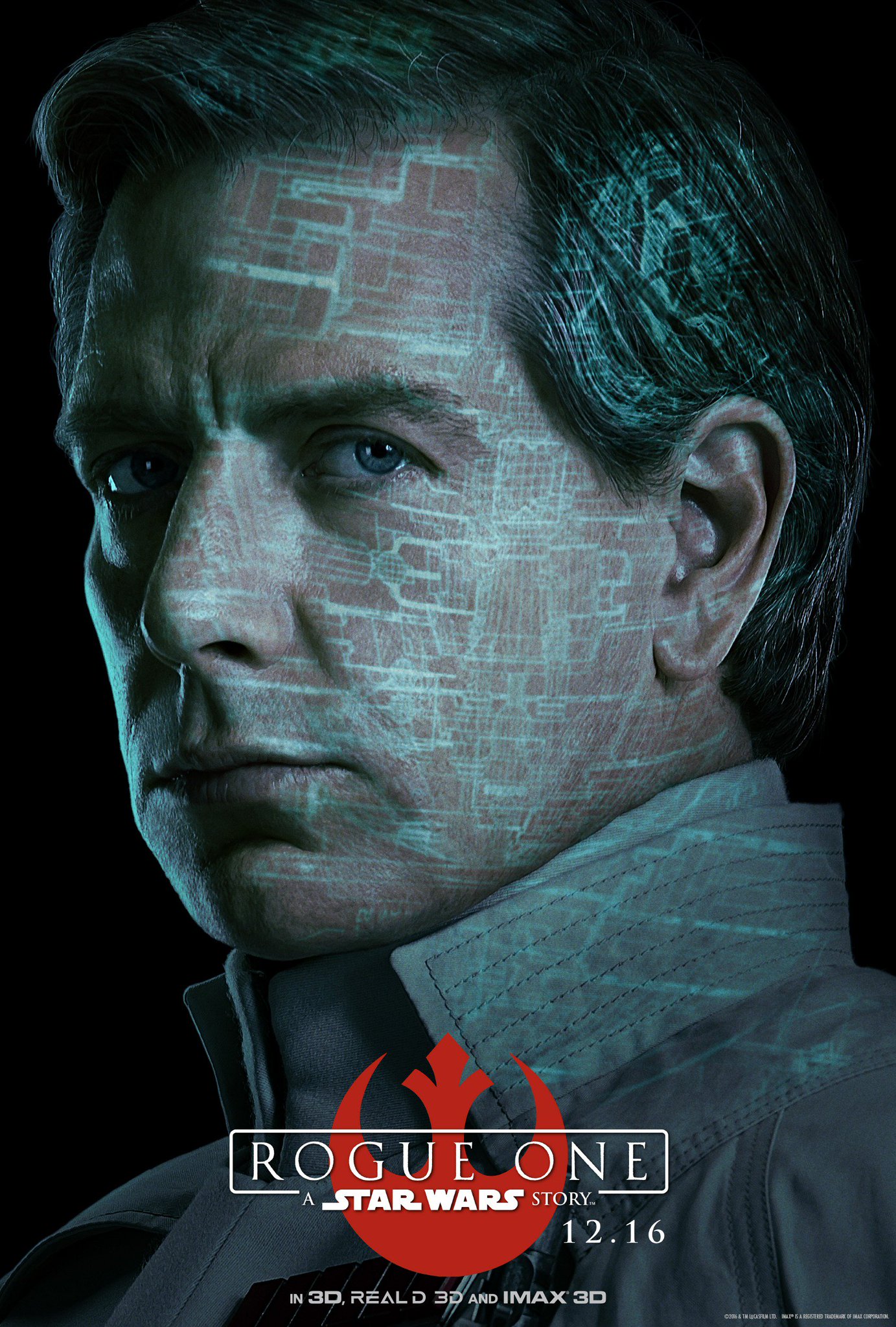 This is a really cool way of showing the Death Star plans and how important they'll be in Rogue One. Although they pretty much motivate the entire plot, they've barely appeared in the marketing so far, or even been mentioned by any of the characters.

What do you think of these posters? Tell me in the comments or tweet to @SithObserver, and may the Force be with you all.
at 4:44 PM 1 comment:

Rogue One: A Star Wars Story is now barely two months from hitting theaters. The third, final trailer dropped this morning during Good Morning America on ABC. With over two minutes of mostly-new footage, this trailer offers our best look at the film yet. Enjoy our shot-by-shot breakdown of the trailer.


This was a great final trailer. It didn't feel like we were seeing the same things we saw in the first two trailers, and it introduced an incredibly important plot detail in the form of Galen Erso. Many fans were already well aware that Jyn's father was involved in the Death Star's construction, but this confirmed to casual audiences that just like the other Star Wars films, Rogue One will be a family affair. (Just not the Skywalker family this time.) 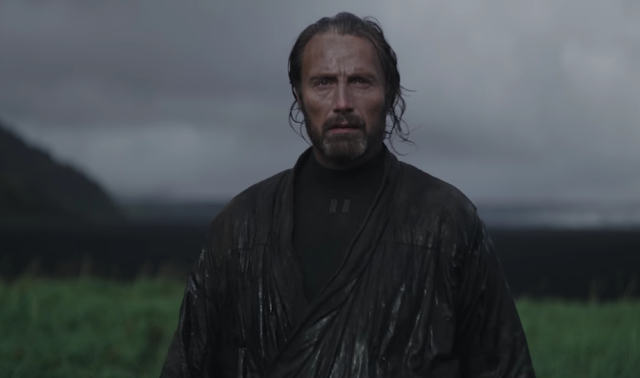 This trailer also did an excellent job of showing us more Darth Vader without actually spoiling any of his role in the plot. The only new thing we learned is that Vader will have interactions with Krennic, which was already very easy to predict.

What did you think of this trailer? How excited are you for Rogue One? Tell me in the comments or tweet to @SithObserver, and may the Force be with you all.
at 6:54 PM No comments: