An extended Rogue One TV spot was released today, this time centering on one of the film's most important relationships: Jyn Erso and Cassian Andor.
Here's a review of all the notable new footage in this TV spot:

This TV spot begs the question, are Jyn and Cassian just reluctant friends in the film, or will they become something more? There are already fans shipping this couple, and you can't really blame them; you'd expect a young, attractive duo like this to become romantic partners in a film – or at least, share a dramatic kiss at some point. 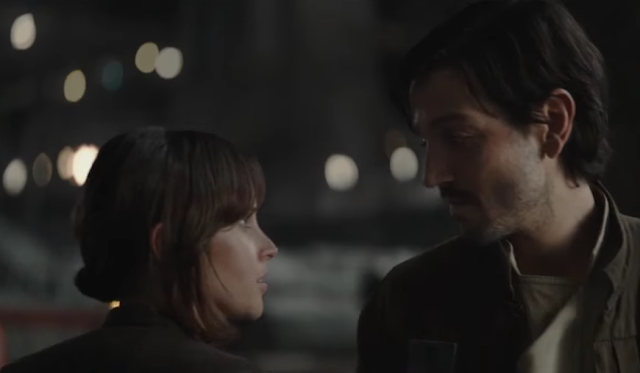 But it would also be progressive of Star Wars to make Jyn and Cassian 100% platonic friends. After all, they're both professionals; can't they just complete their mission without falling in love with each other? Wouldn't it be kinda nice to have a male and female character have each other's backs and care about each other, but don't share romantic feelings? (Like Max and Furiosa in Mad Max: Fury Road.)

In any case, Jyn and Cassian's relationship will definitely be something to look out for in Rogue One. What do you think of this TV spot? Do you think Jyn and Cassian will be friends, or lovers? Tell me in the comments or tweet to @SithObserver, and may the Force be with you all.
at 4:05 PM