Rogue One advance tickets went on sale today in the US, and Lucasfilm commemorated the occasion with an awesome new TV spot for the film that's pure gold for any Darth Vader fan. The Sith Lord's iconic breathing is heard throughout the trailer, paired with a terrifying scream around the 0:18 mark and then his classic "Imperial March" theme.

Here's a review of all the new footage in this TV spot:
It's good that Rogue One has been giving us very few shots of Vader and hasn't been promising whatsoever an epic Vader action sequence that so many fans are clamoring for. But still, marketing like this is what's getting people so excited to see him in the film, and it's why they'll be so disappointed when his role actually isn't very large.

No, Vader isn't going to duel Jyn. He's not going to show up on the Scarif beach and effortlessly slice apart the Rebel heroes in the film's heartbreaking climax. Most likely, he'll show up during the Death Star's test run on Jedha to have a few words with Krennic, and then appear towards the end of the film to mercilessly punish Krennic for his failure. And maybe (depending on how they want to lead into A New Hope), he'll be pursuing the Tantive IV in the film's final scene. 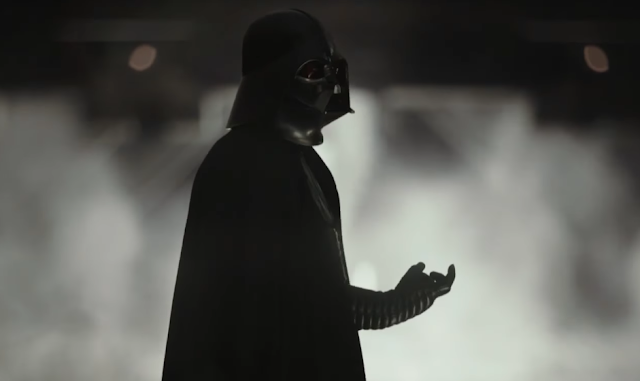 This TV spot might be the best yet, but it's also the reason why some fans will be very upset after seeing the film. They'll say that the marketing tricked them, that Vader was totally wasted, that it's just like the Joker in Suicide Squad. And in a way, it's the marketing team's fault, but you can't blame them too much. If you had a character as iconic as Darth Vader, you'd want to advertise him as much as possible, too.

What did you think of this TV spot? Have you gotten tickets for Rogue One yet? Tell me in the comments or tweet to @SithObserver, and may the Force be with you all.
at 1:00 AM