Goodbye, "untitled Han Solo movie." Hello, Solo: A Star Wars Story. Today director Ron Howard took to Twitter to announce that end of production on the film, as well as its official title. 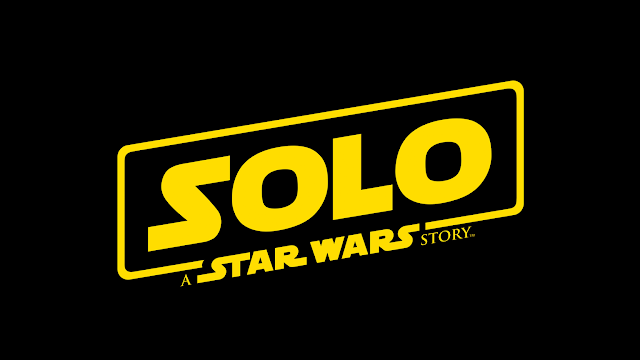 This title is hardly a surprise for fans; it was widely predicted that the title would involve Han Solo's name and "A Star Wars Story," in keeping with the full title of Rogue One. It's ridiculous how much secrecy went into the name of the movie when it amounted to so little. THR is hypothesizing that either this title was selected a long time ago and was kept under wraps for some reason, or the filmmakers were struggling to find a better one and just gave up.

In any case, it's not hard to see why they would be clamoring for an exciting announcement at this time. The film has been in production since February, and it seems that Howard had to reshoot most of what Phil Lord and Chris Miller completed in their first four months, before their infamous departure from the film.

Howard's behind-the-scenes teases on Twitter and Instagram – which were no doubt encouraged by the film's marketing team – helped to create buzz about the movie in these past few months, but with no footage or even official stills, fans were seriously doubting it...and this announcement hasn't changed much. It didn't help that Michael Kenneth Williams was forced to exit the film due to its extended reshoots schedule, with Paul Bettany taking his place.

The film's first teaser trailer will most likely drop in the next two months, alongside The Last Jedi's theatrical release. In the past, Lucasfilm have avoided promoting upcoming films until their predecessors have settled in theaters and their hype has died down, but considering Solo's May 25, 2018 release date, they'll probably have to make an exception.

Knowing their mostly-strong track record with trailers, we can assume that this one will be a nostalgic and effective tease of the film. But given all the bad press in the past four months – not to mention the fact that there was never an especially strong desire for a Han Solo movie to begin with – it will be very difficult for Solo to ever fully overcome the general apathy surrounding it.

What do you think of this title? Tell me in the comments or tweet to @SithObserver, and may the Force be with you all.
at 6:40 PM 4 comments:

Star Wars: The Last Jedi's marketing has entered hyperspace. Tonight the theatrical poster was released ahead of the highly-anticipated full trailer that aired during Monday Night Football on ESPN. The trailer finally pulls back the curtain on the film's plot and visuals, with a special emphasis on the destinies of Rey and Kylo Ren.
As usual, here's our trailer breakdown:

This trailer does a great job of generating excitement for the film without spoiling too much. Aside from the beginning of the Luke/Rey subplot on Ahch-To, we still know very little about the film's plot. The focus is on Rey, Luke, Kylo, and Snoke – the apprentices and masters of the Light Side and the Dark Side – but Leia, Poe, and (to a lesser degree) Finn still get their moments. 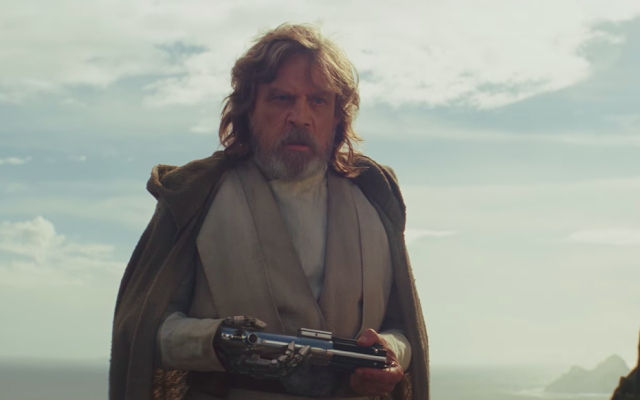 However, this trailer completely ignores the film's new characters—Rose, Admiral Holdo, and DJ. This is a huge disappointment for Rose in particular, since she's grown so popular among fans (especially Asian-American fans longing for representation) and had a prominent role in the merchandising, but still hasn't appeared in any footage. (Her whole Canto Bight adventure with Finn was also strangely missing from the trailer.) Hopefully future international trailers and TV spots will rectify this.

The poster continues the film's Crait-themed, white/red color motif. A hooded Luke appears at the very top, while Rey and Kylo – representing the Light Side and the Dark – pose below him with their lightsabers ignited. Leia is at the center of the poster, right where she belongs, with Chewie and a miniature Rose on one side and the Praetorian Guards and General Hux on the other. 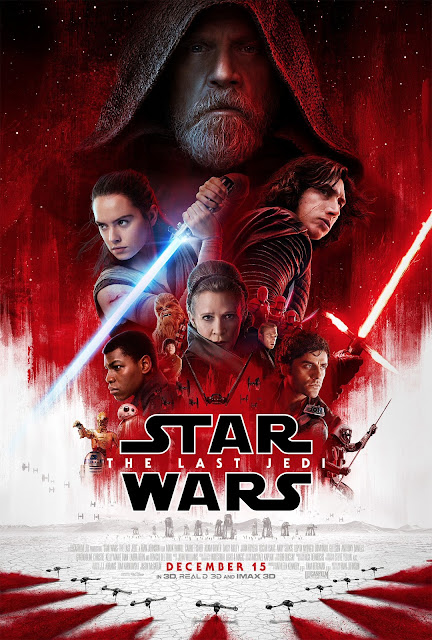 Finn and Poe mirror each other with Kylo Ren's shuttle and TIE fighters between them. The droids of the Resistance – BB-8, C-3PO, and Artoo – round out the bottom left corner, while BB-9E and a spear-wielding Captain Phasma pose on the right. The bottom of the poster is dedicated to the Battle of Crait, with the ski speeders approaching the First Order's walkers, troops, and starfighters.

What do you make of this trailer and poster? Do you want Rey and Kylo Ren to unite? Tell me in the comments or tweet to @SithObserver, and may the Force be with you all.
at 12:36 AM 1 comment:

After a successful (yet flawed) first batch of episodes, Forces of Destiny is back with new shorts this month, once again following the heroines of Star Wars. We're reviewing each of the new episodes:

In Garel City once again, Sabine is paired up with Ketsu Onyo, her old friend and a fellow Mandalorian who was introduced in Season 2 of Rebels. They've been sent to retrieve food for the Rebellion, but Ketsu still isn't sure if she wants to commit to the cause. They wind up in a firefight with stormtroopers and a stray blaster bolt opens a crate, revealing an alien child inside.
Ketsu protects the child and Sabine calls Hera for a quick rescue. Hera fends off the troopers in the Ghost and lets her friends onboard. The child thanks Ketsu and Sabine spray-paints the Alliance symbol on her shoulder pad, officially welcoming her to the Rebellion.

This short once again followed the classic Forces of Destiny strategy of using a cute little alien to humanize its protagonists. It's a tiresome cliché, but at least "Newest Recruit" features more interesting, potentially-lethal action. The Garel City location is also getting a bit tiresome after three consecutive episodes; you'd think that women as smart and resourceful as Jyn, Sabine, and Leia would be conducting their business in different places. 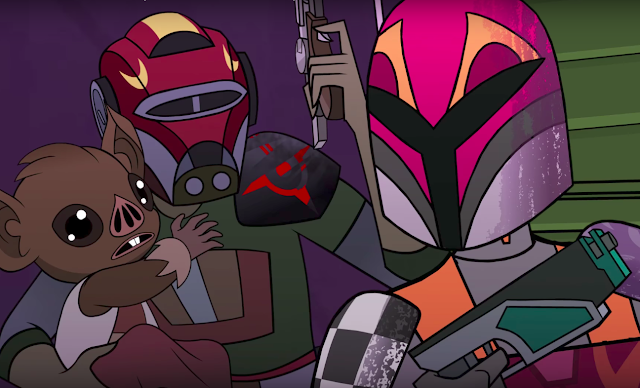 The most valuable part of this episode is its titular character, Ketsu, whose personality and history with the Rebellion is fleshed out. This is the first time Forces of Destiny has given a second thought about the franchise's lesser-known female characters (not to mention one of the few on-screen black women in Star Wars), and it would be great to see more of them in the future.

On the way to Maz Kanata's castle on Takodana, the Millennium Falcon abruptly exists hyperspace. They already scanned the ship but Rey hypothesizes that Unkar Plutt may be using a new kind of tracking device. Rey, Chewbacca, Finn, and BB-8 search for the tracker while Han fixes the hyperdrive. Chewie finds the tracker and Finn removes it, only to set off a timer on a rigged explosive.
Chewie and Rey rush to the airlock while Finn warns Han. They eject the bomb and the Falcon jumps to hyperspace, narrowly evading the explosion. Han compliments Rey on her catch, and she remarks that they make a good team.

The only relevance this short bears to The Force Awakens is a deleted scene in which Unkar Plutt shows up at Maz's castle. The plot is predictable and not very interesting to begin with, and suffice it to say, an inanimate bomb is an even less compelling antagonist than interchangeable stormtroopers. 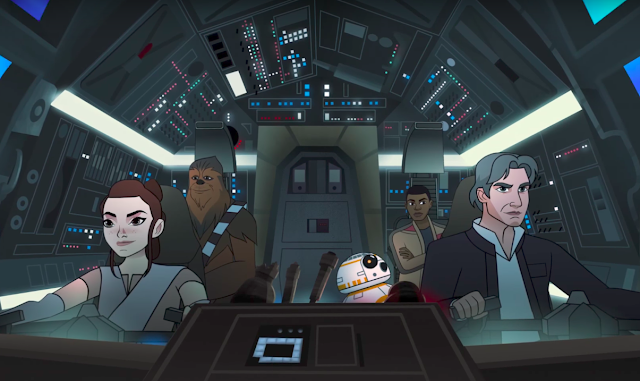 As with Forces of Destiny in general, the main purpose of this episode is to build on characters and their relationships. Seeing this team work together again makes Han's death all the more impactful, and Rey and Chewie's bond over their tech lingo is even significant to The Last Jedi, since the Wookiee accompanied her to Ahch-To and will undoubtedly have more scenes with her.

At the Jedi Temple, Anakin is training Ahsoka to fight with two lightsabers. She's having a hard time making use of both blades. Yoda arrives and challenges the Padawan to a practice duel. He easily defeats her twice and encourages her to use her own fighting style.
Using her signature reverse-grip style, Ahsoka blocks Yoda's attacks with both of her lightsabers. He encourages her to continue training with Anakin, but still put her own unique spin on his teachings.

The addition of Ahsoka's second lightsaber was pretty abrupt in The Clone Wars – it just became an essential part of her character without the audience learning why she of all Jedi got this extra weapon, much less how she learned to use it – so it's great to learn something more about it. It's also a much more important story than "The Padawan Path," which simply showed how she earned one of her Padawan braids. 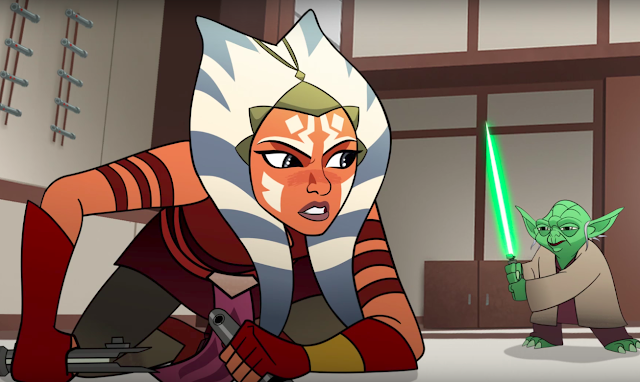 Perhaps the coolest thing about this short is that it puts the spotlight on different lightsaber forms, which are rarely shown in much detail. Each of Ahsoka's moves is a progression of her character throughout this episode, and it's no coincidence that the final one she uses to block Yoda – crossing her blades behind her back – is the same one she would later use with Darth Vader in Rebels. 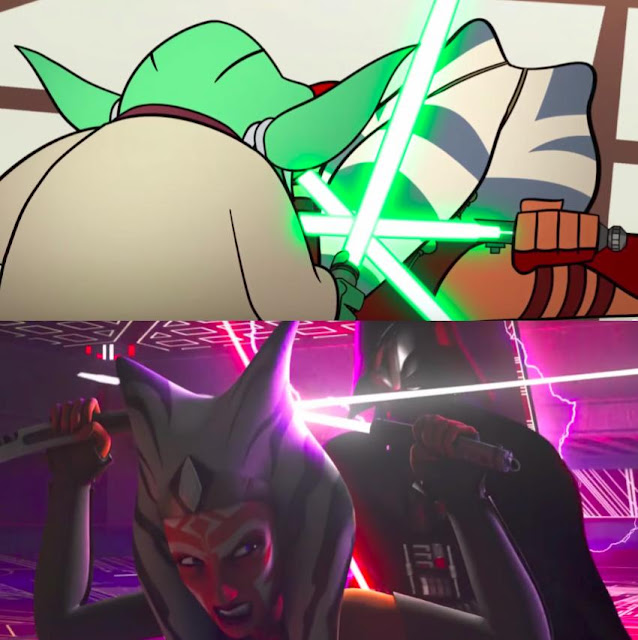 Ahsoka is teaching Padmé combat maneuvers in Naboo N-1 starfighters. With R2-D2 as her copilot, Padmé follows along with Ahsoka until a droid starfighter awakens from underneath an asteroid and opens fire. Ahsoka suggests that they improvise to defeat it. An ion torpedo homes in on Padmé's ship and Ahsoka takes the blast, rendering her unconscious.
Padmé baits the droid and flies into the trail of a comet to hide. She emerges behind it and blasts its wing, sending it tumbling into the trail before it explodes. Ahsoka wakes up in her ship, hardly surprised that Padmé managed to fend for herself, and the two head home.

While Padmé was always shown to be an adequate pilot capable of flying and landing her own ship, she never really got much vehicular action, so this short actually feels like an exciting addition to her character. Not to mention that Ahsoka – whose piloting skills were also underused in The Clone Wars – is acting as Padmé's mentor this time, cementing their relationship as one of the best and most dynamic among the ladies of Star Wars. 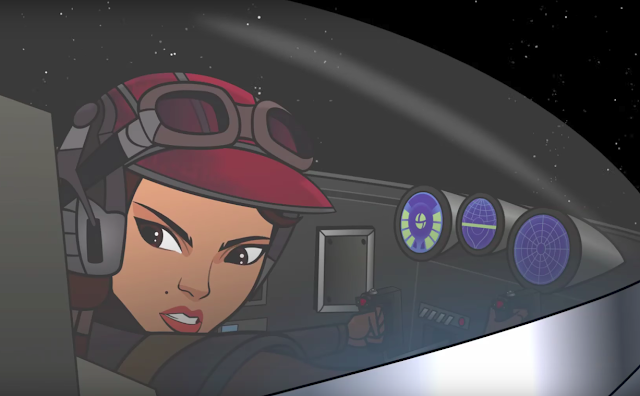 It's definitely annoying that Padmé is the only major Star Wars heroine who Forces of Destiny seems to have deemed incapable of leading a short by herself. However, unlike with "The Imposter Inside," this time Padmé is allowed to save the day on her own. This is ultimately her story, not Ahsoka's, and while it may not be as interesting as "Imposter," it is a nice change of pace from the terrestrial setting of most of the previous episodes.

Which of these episodes is your favorite? Who do you hope shows up in future Forces of Destiny shorts? Tell me in the comments or tweet to @SithObserver, and may the Force be with you all.
at 5:24 PM 1 comment: